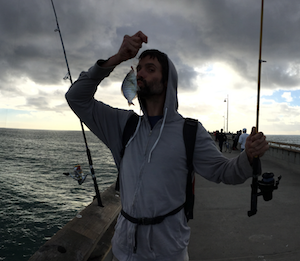 Trent grew up in a small farm town in central California and has spent most of his life working with children. During his school career he worked five summers as a counselor in the Southern Sierras leading riflery and small animal activities along with other activites such as plum golfing, forest running, disc golfing, zucchini carving and many more. Trent’s fame at that camp is widespread, as any creative activity there is still (15 years later) referred to by campers and counselors as “Trenting”. As any of his co-workers can attest, Trent was born to work with children and direct a summer camp. He has directed kids camp programs at a camp in the San Jaun Islands in Washington State, directed the Counselor in Training program at his old camp in the Southern Sierras, worked as an outdoor education instructor in Michigan and then in California, worked several years as a director at a summer camp in the San Francisco Bay area, and spent a year teaching English in the little Thai mountain village of Hauypa.

After working with Danny Hundert one summer at the camp in the southern Sierras, Trent and Danny traveled to Central America where they worked on a sustainable farm in the jungles of Costa Rica, picked coffee in Nicaragua, explored volcanoes and historical sites with locals in El Salvador and Guatemala. More important, in Central America Danny and Trent began planning their ideal summer camp programs and the steps necessary to start the perfect summer camp. Four years later those plans would come to fruition in Ajax Adventure Camp, which launched in 2010.

Trent graduated from CSU Monterey Bay with a BA in communications. He learned to be a chef while managing a restaurant in Sun Valley, Idaho. He gained his horsemanship skills by training cutting horses in Northern California. Through his hobbies and work experience he is skilled in swimming (lifeguard), hiking, rafting, archery, climbing, ropes course instruction, guitar, drumming, bass, piano, trombone, playing music with trash, spear fishing, cooking exotic foods, ping pong, soccer, yogurt making and catching chickens. He also has conversational skills in Spanish and Thai and can make jokes in Czech, Russian, Hebrew, Mandarin and Japanese. Trent has a long term goal of helping people develop personally and socially as well as to lead them to experience and appreciate the awe of nature.